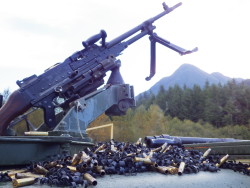 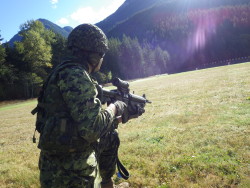 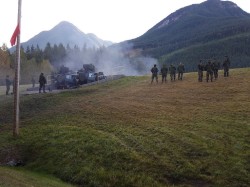 For the newer members of the British Columbia Dragoons, this range weekend was as opportunity for them to first attempt the Personal Weapons Test 3 conducted on the C7 Rifle, and for existing members to hone and improve upon previous scores.

According to Major Peters, OC of Recce Squadron:

This was a tremendous exercise for the members to test their proficiency and marksmanship using the C7 standard service rifle during personal weapons test PWT3. It also afforded us the opportunity to conduct refresher training and shoot the various other weapons available in the Canadian Forces arsenal that we don’t typically shoot very often

It was a great chance for soldiers to be able to improve their skills with the various tools we use in the combat arms. While the ranges were conducted in a safe manner, the soldiers certainly seemed to have had a fun time. We were even able to bring out cadets to see how ranges are conducted in the Canadian Forces, and gave them the opportunity to shoot the C7 rifle.

With some BCD members also returning from their summer course at the Canadian Armed Force Small Arms Concentration (CAFSAC), it provided an ideal time for returnees from that advanced shooting course to pass on knowledge to the remainder. At CAFSAC, Canadian Forces members were taught the principles of advanced marksmanship, principles that British Columbia Dragoons attendees of the course hope to pass on to the rest of the regiment.

According to Corporal Lafortune, CAFSAC was a fantastic course that helped make a monstrous difference in his shooting abilities. According to him:

At CAFSAC throughout the summer I learnt about some incredibly small details that help make immense improvements to shot accuracy and speed. We were taught to not accept the minimum, and to constantly strive for more effective marksmanship, under challenging and stressful situations. Small tips and knowledge that when combined with training and practice make for a more effective combat shooter.

Cpl Lafortune used that knowledge to score 48 out of a possible 49 on his PWT 3 shoot. For the rest of the British Columbia Dragoons, it was an opportunity to learn from CAFSAC attendees, to work to improve their own proficiency and individual weapons test scores, and work towards implementing advanced marksmanship principles in order to contribute to a more effective combat unit. 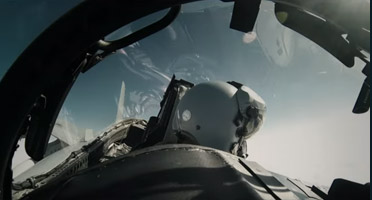